Update below on August 11: Printing has begun!

Tragic news, shared a few days ago by the #NEWPALMYRA project:

Yesterday we received the devastating information that #NEWPALMYRA founder Bassel Khartabil was unlawfully executed by the Syrian regime. Needless to say, along with all of the international community whose lives he touched, we were shocked and saddened to learn of the outrageous, unwarranted, extrajudicial killing of our dear friend and collaborator.

To continue supporting Bassel’s memory and work, Creative Commons has set up the Bassel Khartabil Memorial Fund, at the request of his family. Please donate today.

If you don’t know about Bassel or the #NEWPALMYRA project he founded, well, there is a lot to learn. He was a person committed to free software and open culture, not to mention real change in the world, with technology playing a critical role in that. The project is focused on  using digital tools to preserve heritage sites, including modeling a number of sites in Syria that have been recently destroyed by the war.

This section of the epic Tetrapylon of Palmyra — part of a set of four, four-column pylons that would have marked an intersection or central place, was destroyed in 2016. #NEWPALMYRA released this version at the Creative Commons Summit in April 2017.

The original, now destroyed tetrapylons on the left, and the latest printed model from the Creative Commons summit on the right.

Since its inception, this was a project that I have been personally fascinated with, both as an activist fighting against the destruction of cultures, and as a geek wanting to put cutting edge technology to the maximum possible beneficial use. In my own life, I began documenting buildings from my home town that had cultural significance, and have started the long process of turning them into 3D models, that can be printed again, or experienced through virtually or mixed reality experiences in the future.

All of this work has been done within the guiding light of free software, and free, open, pro-remix, reuse culture that Bassel worked on and contributed to as a technologist and advocate. I hoped that Bassel would one day be freed, to see what has become of the roots he laid, and understand how prescient and important it was. Sadly, instead, we must find ways to memorialize him, support his family, and ensure his causes and efforts continue.

I have decided to start the  #PRINT4BASSEL Participatory Memorial, calling on everyone who has access to a 3D printer, to spread awareness about Bassel’s vision and life, promote the work of #NEWPALMYRA, and raise donations for the memorial fund.

I am working hard to complete my own first set of memorial prints, which I plan to put on display at multiple locations throughout Boston, Cambridge and Brookline, where I work and live. Please join me in this effort, and tweet or comment here to let me know where you plan to #PRINT4BASSEL.

To continue supporting Bassel’s memory and work, Creative Commons has set up the Bassel Khartabil Memorial Fund, at the request of his family. Contributions to the fund will go towards projects, programs, and grants to individuals advancing collaboration, community building, and leadership development in the open communities of the Arab world. Please consider making a donation if you are able so that New Palmyra and others can continue their important work.

Update August 11: I’ve printed my first Tetrapylon, thanks to the printer at Cambridge Innovation Center. For this setup, there was no connected computer, so I had to find a way to convert the STL file provided on the NewPalmyra.org website into a “.Makerbot” file, that could then be loaded on a USB drive. After wrestling with a number of open-source solutions for Linux, I eventually downloaded Makerbot Print, and ran it on my Windows partition. I printed the model at the import size, which ends up being about a few centimeters tall, and taking about an hour to print. I enabled “supports”, to ensure the columns and top would not collapse. All in all, once I figured out the Makerbot software, it worked out well. From here, I plan to complete my small memorial prototype, as proposed above.

… and lastly, my first complete prototype for a small memorial. The QR code links to http://newpalmyra.org 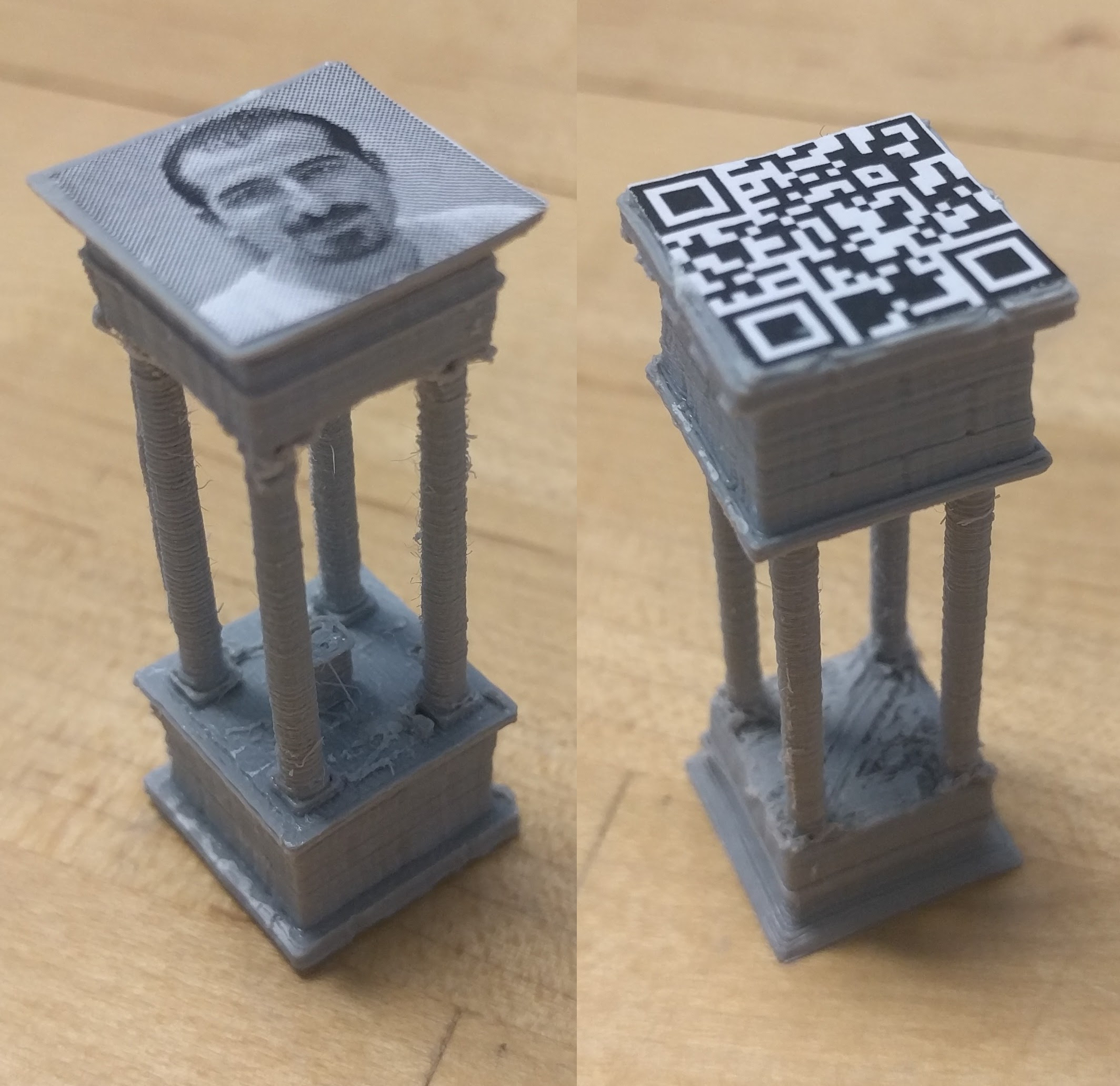